When my daughter was 16 we went to a child therapist because my daughter was having so much trouble with depression. When Sydney left the room, she took me aside and said “You know, I was one of the child therapists that assisted in providing care for the children from the LDS cult of Warren Jeffs. I’ve worked a lot with children from strict religious backgrounds. The children who had strict clothing rules were actually well adjusted. You know why? Because that’s all they saw. They were in an enclosed environment, so the clothing issue was not damaging to them. But your church is trying to live that way in the middle of a big city where the kids are sent to school, and other places looking completely different from everyone around them. While that may be your church beliefs, your leaders should reconsider what they are putting their children through by doing this, and the damage it can cause in some children.”

Boom! That stuck with me. Why were we constantly throwing our kids into an opposite environment and then criticizing them for wanting to be like the society around them?

My husband and I told my daughter that if we had to do it all over again, that’s one of the things we would change. We’d let her wear pants, let her figure out her own identity and life at the time that she needed to–adolescence. If she got saved and God wanted to show her, he would be faithful to show her about what she needs to wear. To finally talk about this helped her come to grips with a lot of deep anger she had toward us and some of the cause of her suffering as a teenager. She said that although our realizations came too late for her she was glad we were independent enough to finally see these things and listen.

The principle of modesty in the heart is more important than forcing children to wear particular clothing items.

Although I called myself explaining our clothing standards with I Timothy 2:9, the more I studied my bible, the more I realized that little was said about clothing and that modest apparel did not confine itself to a particular clothing item. What is modest in 2019 is not the same as what was modest in 1919 or 1819. What was modest in 1940 would not be the same as today. Modest in the bible (the word Kosmio) means orderly, appropriate, decent. That’s it. Decent with what is appropriate for surroundings. Would a young Christian girl mar her testimony by wearing a pair of jeans? Would that be controversial to the people she’s trying to reach for God? In 2019? No.

Jesus Is Our Perfect Example

Consider this, Jesus never gave any clothing rules to the men and women that followed him, and his appearance/clothing was common for his day. When we turn to the epistles, we see the Apostle Paul addressing immediate issues of various congregations as well as preaching gospel principles. One of them was modest apparel, but in this passage, he also spoke against elaborately braided hair the women of that day wore and expensive clothing. None of us are running around looking at each other’s price tags, are we? When he spoke in ancient times, he was talking about this: 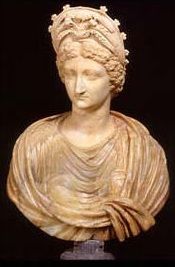 Women of the day wore hair as a social status. Our church focused on the term modest and attached that to wearing what they considered sexually alluring clothing items (and some dresses can be alluring as well) this included all pants, not even coulottes were acceptable. Paul’s focus in this passage was extremism in clothing and ladies showing off social status through dress and hairstyles.

I’m sure that both boys and girls went through their struggles with rules. But the girls had to be perfectly unalluring –“cover up everything.”(even down to sleeve lengths). Couldn’t put any pressure on those men to keep their eyes in their head and not lust. What a weak Jesus this presents to people. The responsibility was all on the woman to cover up.

My husband said this: ” I always wondered why I could walk down the street and see women in pants every day and not lust at all, but when I came to church the women would be accused of being inappropriate and too alluring if they wore pants because they would be too much of a temptation to men. I saw women every day dressed like this and so did all the men in our church, but we were not struggling. And honestly, if any man was struggling just by seeing women in pants, they had a bigger, more serious problem than what the woman was wearing”.

Someone who obviously had influence in our group decided what modesty meant for everyone and although that may have been appropriate 50 years ago to say all skirts, it may not be today.

Modesty is still a biblical principle but it takes prayer to assess what that means in an increasingly immodest world.

The older ones in our group have told me that when all that healing was going on in the 60s, etc., they wore pants gardening or when they were doing rough things. How it got to no pants– never, ever —is a mystery.

A woman in the 1800s would have been immodest for showing her legs, but showing her shoulders or back was not a problem. 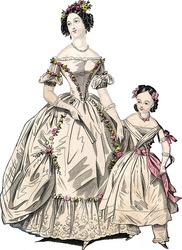 As we progress through time and women worked more, clothing changed primarily after WWII. Pants became part of women’s wardrobe.

Look at this crowd at a baseball game in the 1950s. Can you imagine men and women going to a sporting event in suits and ties? But that was society back then and that was appropriate attire. ( I think I see a woman with fur on her coat!??)

The point is, what is appropriate and decent in society changes.

I think after a while in our church it became a cult of personalities. Prayer and seeking God about matters went to the background and just doing what the most popular preacher and his wife said took its place. In fact, it seemed to take precedence over the Spirit of God. Why couldn’t a parent pray and decide what their child should do or wear? I thought we were all to be led by the Spirit? I don’t know when that happened and where, but I know in the last 20 years it got exceedingly worse where it was held with no compassion or consideration at all. Just measure up or you will be ostracized.

For example, a Pastor in our group, who was a functioning Elder stated that he didn’t have a problem with modest makeup and jewelry and was immediately cut off by some of his people and other leaders helped them start another church as if he was backslide and not fit for leadership. He held this belief the whole time he was ministering to them as an associate minister but when he became the Pastor it was made a huge issue. No doubt he was a blessing to them or he would not have been ordained. His former Pastor who was in good standing, knew that he felt this way and out of respect to the Pastor he didn’t spread his views, but when that Pastor died and he was put in charge, he was honest to the people about his beliefs, and that was the end of that fellowship. All over clothing. Way more important than his character apparently.

I can’t tell you as a minister how many women I’ve talked to that didn’t even have strong convictions about some of our rules, but conformed to keep the peace and continue to hold positions and exercise the gifts God gave them.

The truth is our group does not trust God to lead people, and they are fearful of any change even if its change from the Holy Ghost, and even if it no longer can be explained or is beneficial to the gospel. Change is hard, I know, but this is just one of the things that traumatized not only my daughter but judging by the texts that I’ve received, it hurt others as well.

Even at 23 years old, this issue of control and being bullied for what she wore was a tough conversation for my baby because it went into the depths of her feelings about herself, her childhood, and the unsaid message she received that her goal in life was to please other people and worry about what others think.

4 thoughts on “A Word About Women’s Clothing”